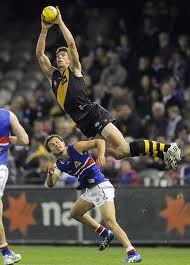 It is football finals time in Australia (Australian Rules or AFL), commencing this weekend, culminating in the Grand Final on 3 October at the Melbourne Cricket Ground (or the MCG, or the “G”).


This is an exciting time for footy fans, especially if your team has made the final eight. Mine, the North Melbourne Kangaroos, scraped into eighth place and faces an Elimination Final against the Richmond Tigers (a Melbourne-based club) this coming Sunday. The Western Bulldogs (Melbourne-based) and the Adelaide Crows (South Australia) compete in the other Elimination Final.


History suggests the chances of the winner of an Elimination Final making it through to the Grand Final are slim, because the teams finishing in the top four receive a decided advantage. However, Kangaroo and Tiger fans live in hope (as do Bulldog and Crows supporters).


Two teams from Western Australia, the Fremantle Dockers and the West Coast Eagles, finished the season in first and second place respectively, followed by the Hawthorn Hawks (Melbourne-based and going for three consecutive flags) and the injury-depleted Sydney Swans (New South Wales).


I, and other footy followers should be excused from participating in any other topic of thought, conversation, or entertainment other than footy-speak and footy-talk shows until after the Grand Final.


Strangely, non-footy fans (including my wife) don’t seem to understand this and delude themselves that there are more important things in life than football.


This is very sad. However, I am very tolerant of non-believers and, whilst acknowledging they are misguided, I live in hope that one day they will all see the light.