(Myopia: a lack of foresight; a narrow view of something) 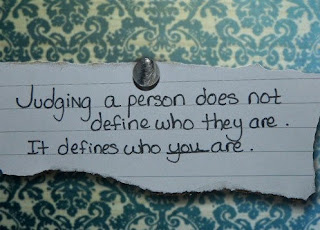 I was watching a football match (Australian Rules) on TV last week when one of the umpires awarded a player a free kick, resulting in a goal, after his opponent had infringed on the rules.


One of the expert commentators was affronted by what he saw as a wrong decision. However, his fellow commentator leapt to the umpire’s defence, arguing that the decision was correct. Slo-mo replays of the incident did not resolve their different opinions.


As for me, I clearly saw that the umpire got it wrong. I’m sure the fact that the decision went against the team I support had no influence on my opinion!


We’ve all heard the expression: “You only see what you want to see”, and, no doubt, we’ve seen countless examples of this by us and by others. I certainly have.


Speaking from personal experience, how I see things reflects my state of mind at the time. It reflects what I want to see. Regrettably, too often, it reflects something I don’t like about myself, that I then project out of my subconscious mind onto others, manifesting in false judgments.


No, I’m not talking about superficial judgments about umpiring decisions at football matches. I’m talking about how quick I am to see fault in others and judge them harshly to cover up my own perceived shortcomings.


However, I’ve discovered that projection of what I don’t like about myself onto others doesn’t work. It only increases my own guilt.


Playing the judgment game for most of my life has certainly caused problems, misunderstandings, and conflicts. My faulty judgments (of people) have caused me and others much pain.


I am beginning to learn that having the awareness I am choosing to be offended by people in some way and judging them accordingly, having projected my own stuff onto them – means I can make another choice to prevent me from making hasty and false judgments.


By curbing my immediate urge to jump to a wrong conclusion and condemn someone through judgment, can save me (and others) from unnecessary pain.


Still on training wheels with this new approach and experiencing more spills than successes. But I keep trying to get back on the bike.


In the meantime, I’m still struggling with that football umpire’s grossly unfair and incorrect penalty!
Posted by Unknown at 22:17